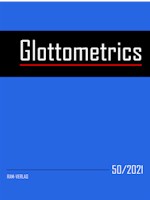 Glottometrics is a scientific journal for the quantitative research of language and text published 2-3 times a year.

All issues of Glottometrics have the ISSN 1617-8351 and are available as:

Aims and Scope/ Editorial Board/ Confirmation

Complete bibliography of all publications of the first 30 issues

Complete bibliography of the issues 31-50

Happy Birthday Glottometrics – On the Occasion of the 50th Issue and 20th Anniversary
Exactly 20 years ago the journal Glottometrics was founded by Gabriel Altmann, the well-known nestor of quantitative linguistics. He was not only the founding editor, but he also continued to be the editor-in-chief of this journal (published by RAM-Verlag) for the next 20 years. The title of the journal can be seen in close relation to Glottometrika, one of the subseries of the Quantitative Linguistics book series (published since 1978, in the beginning by Brockmeyer in Bochum, then by WVT Trier and now by de Gruyter). The initial idea of Glottometrics was to be a platform for quantitative linguistics and related topics. Indeed, quantitative and statistical methods are becoming more and more popular in linguistics and literary studies. Thus, it is no surprise that since its launch, nearly 400 research articles (including reviews, project descriptions, software presentations etc.) have been published in Glottometrics. This is without any exaggeration an occasion for celebrating, but also an occasion for reflecting on the past and planning for the future.
The unique profile of Glottometrics is, without any doubt, Gabriel Altmann’s merit. It is one of the journals (in addition to the Journal of Quantitative Linguistics, and in some respects also Glottotheory) focused on the publication of research articles on quantitative linguistics in a narrow sense. At this point it also has to be remembered that this comfortable situation for scholars is by no means self-evident. We are sure that many colleagues will remember the times when the application and the use of statistical methods in linguistics was not really accepted, or at least it was considered something exotic or a more or less interesting endeavour. Historically seen there have been many journals (cf. the impressive list given by Rostin 2016) open-minded towards statistical methods in linguistics, but many of them were only published for a short period (cf. for instance SMIL Quarterly – Statistical Methods in Linguistics, being published only for a short time in the 1960s by Scandinavian colleagues), or published quantitative linguistics topics only sporadically (cf. for instance Prague Studies in Mathematical Linguistics, a publication platform for quantitative and algebraic approaches). In this respect, the possibilities for the publication of quantitative linguistic topics significantly increased with the establishment of Glottometrics. Since its beginning, it has been a compact and open place for linguistic analyses which used mathematical and statistical methods, while also bearing theoretical perspectives in mind.
Taking a brief look at the articles published in Glottometrics in the past years, some clear focuses can be observed, which also give in some respect information about the present shape of quantitative linguistics. One remarkable focus is (in a narrow sense) on three kinds of linguistic laws:
(1) Functional laws (among them the most prominent one being the Menzerath law, “The longer the constituents, the shorter its constituents),
(2) Distributional laws (among them the most prominent one being the Zipf law, which is in fact an umbrella term for different statistical interrelations between frequency and rank of (not only linguistic) units, word length and frequency, frequency and polysemy etc.) and
(3) Developmental laws (such as the Piotrowski law, which contains information about the regular behaviour of language dynamics and change processes (cf. Köhler/Altmann 2005)).
In this respect, mathematical modelling of linguistic phenomena and related problems, as well as theoretical and methodological challenges, has been of outstanding interest for recent quantitative linguistics. Beyond this, there are of course many other areas and branches of linguistics where quantitative and statistical methods can and should be applied. Based on the publication profile1 of Glottometrics, quantitative and author-specific stylistics (stylometrics), metrical studies, phonological and phonosemantical issues (syllabic structure of languages), vocabulary studies, problems of morphosyntax (e.g. studies about adnominals, compound studies) and quantitative analysis of semantic characteristics (polysemy, synonomy) have been some of the core areas of Glottometrics of the past years. One further focus is the history of quantitative linguistics, where many interesting bibliographical sketches and background information of people working “quantitatively” from many different countries have been given.

An empirically based taxonomy of objects studied in Glottometrics is given by Lin/Liu (2017: 17), which provides a much more representative overview than the one above:
(1) System: laws in language systems, properties of a system like economy or symmetry, and relations of levels or elements within a system;
(2) Phonology and phonetics: phonemes, prosody in literary works, sound symbolism;
(3) Morphology, lexicology and lexicography: word class, word frequency, word length, type– token relation, entropy, polysemy and synonymy; affix, borrowing and compounding;
(4) Sentence and syntax: sentence length, syntactic complexity, syntactic network;
(5) Semantics and pragmatics: lexical semantics, information content in communication;
(6) Text: text genre and style, translation, text processing;
(7) Dialectology, typology, diachrony, psycholinguistics, language learning, computational linguistics;
(8) Script: script complexity, grapheme–phoneme relationship, letters;
As regards the language of publication for Glottometrics, a clear trend towards English (cf. Lin/Liu (2017: 6) can be observed, and in the last issues almost all articles appeared in English. Being initially a Germany-based journal, English played an important role from the beginning,
thus reflecting the ongoing internationalization of linguistics in general. This is also related to ishing in Glottometrics are located all over the world, with a remarkable increase in quantitative linguistics activities in Asia (in particular in China).

Quantitative linguistics is, like every other scientific discipline, subject to ongoing dynamics and changes, and as the scope and publication profile of Glottometrics shows, it is upon the quantitative linguistics community to shape the future development of the journal and its contents. It is one of the duties of the editorial team to take note of recent trends in  academic publishing, like the required inclusion in relevant citation indexes (Glottometrics has been indexed in Emerging Sources Citation Index (ESCI) since 2015, and in Scopus since 2017), an attractive digital form of publishing, etc. The most significant change expected for the near
future seems to be a diligent restyling of the layout and the  transformation of Glottometrics into a fully fledged open-access journal (and listing in https://doaj.org/). This is all aimed at facilitating the continuity of Glottometrics as a high-quality peer-reviewed platform for
research in quantitative linguistics. One also has to remember at this point that Glottometrics was initially (also) founded to be a publication platform for young and early career scientists, an idea which will continue to be supported by the future editorial team.
Glottometrics – Ad multos annos!

Written by the editors of this issue:
Emmerich Kelih
Radek Čech
Jan Mačutek